Restoration continues on the 1918 release of "The Trail to Yesterday".  Due to missing footage, the restoration will 're-incarnate' into the Dutch distributed release title: Revenge of Dacota.

The 'second-pass' restoration on the digital transfer format of the scanned film (.DPX), is focused on removing remaining artifacts left from the first pass of the restoration.  In addition to artifact removal, frame stabilization, sizing each scene to 35mm film picture size (1:33); and setting the historical standard frame rate of 16-fps set in 1916 by the Society of Motion Picture Television Engineers® (SMPTE); is being accomplished. 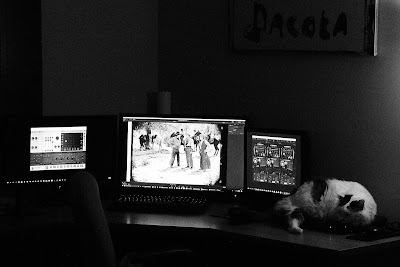 DaVinci Resolve Studio tools for the restoration arrived on the scene at just the right time to accomplish this opportunity.

This second-pass restoration effort is frame-by-frame this time, as opposed to using algorithms (first-pass) to scan the files utilizing VivaPRO software.

Posted by Blogs of Bart Santello at 10:48 PM