The image below is a photo of the promotional graphic for "Road Storm" a forthcoming experiential digital project by Psychotropic Films.  A beautiful and incredibly chaotic lightning bolt was captured from a 1/30th of a second frame of digital video. The lightning bolt was not retouched; it's shown as photographed then was incorporated as a graphic element into the film's promotional art. 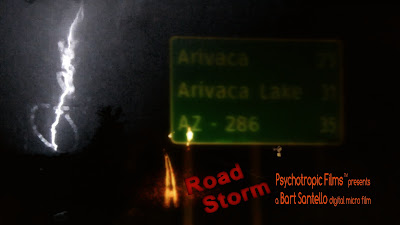 The sound design I created for the work, came primarily from audio field recordings of the summer monsoon storms in southern Arizona.  The combination of the audio layered over the storm imagery creates a powerful sensory dynamic.

Posted by Blogs of Bart Santello at 10:56 PM