I found a reel containing 275-feet of developed 8-mm film at a thrift store in Phoenix.  Pencil markings on the film canister said: Phoenix 1952.   Curious to know what I would find on the reel, I sent it off to a lab to get it digitally scanned.

What was eventually revealed was an (unknown) family's road trip to Phoenix, Arizona in 1952.  The beginning of the film provides a clue that it was winter; based on 'slush' I observed along the side of the road somewhere in Louisiana. Thus this trip was a winter family vacation to the sunshine state of Arizona.

The film runs 27-minutes; starting with images from Louisiana, then shots from
Texas via the Alamo, continuing west with a good portion of the images taken at the Coolidge Dam (Arizona).  The family finally ends up in Phoenix. 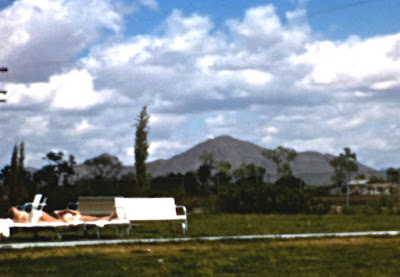 A woman relaxes, as Camelback Mountain looms in the background
(1952 - Phoenix, Arizona)

So what to do with film of unknown origin(?)  I will eventually post this film online as a public resource for historical reflection and artistic re-purposing, by those finding interest.

I will examine the film closely to see what part of the film can be used as an 'element' in any of my current or future film projects.

Posted by Blogs of Bart Santello at 11:00 PM