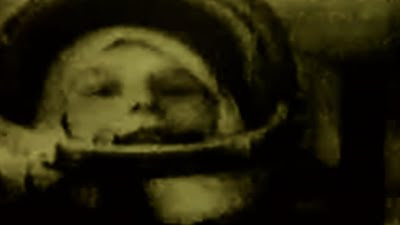 "Valentina Tereshkova is not only about a brave woman that wanted to explore space, it's also about the technology it took to get her there."  Bart Santello - Filmmker

I've been curiously researching the Soviet space program while working on another project.  From this process, a film kind of 'spun-off' and birthed itself from ideas on early space travel.  Now it's all I'm thinking about (..how to put this film together).  I'm getting a sense that through the production of Valentina Tereshkova, I'm starting to see how some of my future films can be developed. At the same time, I 'm applying visual textures and themes from some of my earlier films (Intangible, Controlled Bleeding, and Man Trap).  I'm discovering how I can build-upon those previous works in order to bring renewed excitement in the lost art of crafting a 'motion picture'.
I have several more months of post-production to do on this film.  But after viewing the first 'pre-visualiation' rendering a few days ago, I knew I had all the artist elements in place.  It's like a feeling of...."Now I have the roadmap."
I hope to have this short film ready for the Arivaca Independent Filmmakers Exhibition scheduled for March 6th, 2010.
Posted by Blogs of Bart Santello at 10:34 PM

doc lockwood said...
This comment has been removed by a blog administrator.
6:10 AM

Waiting with baited breath!!! Is this a new "form" that merges the creative arts with historical scholarship? The dual of art history? Historical art? Not the docu-drama meant merely to entertain and that some passive viewers mistake for education. Nor the documentary that lectures to a passive viewer.

Based on prior work of Psychotropic Films, I anticipate that it will be more like art that can draw the viewer into active engagement with the past through the lens of the idiosyncratic present. Let it be something that throws the individual into the past while being firmly grounded in the contemporaneous aesthetic experience yet not be limited to the mere aesthetic.


This all makes me think of a passage from one of my favorite poems (TS Eliot - Burnt Norton):

Time present and time past
Are both perhaps present in time future,
And time future contained in time past.
If all time is eternally present
All time is unredeemable.