With regards to digital cameras, there are hidden gems discarded from the recent past as we chase the next camera technological innovations or photography and video.  I came across the Pentax KS-1 produced for only 6-months in 2014.  It features a large high resolution 20 megapixel image sensor that offers excellent clarity and detail thanks to a Shake Reduction system and no anti-moire filter to interfere with sharpness.  But what really grabbed my attention was an effects filter setting called "Bold Monochrome" for high contrast B&W photography and video.  I created a blog to display images produced by this camera in Bold Monochrome.  For use in video, the look is almost like 16mm B&W reversal film.  Link to blog below. 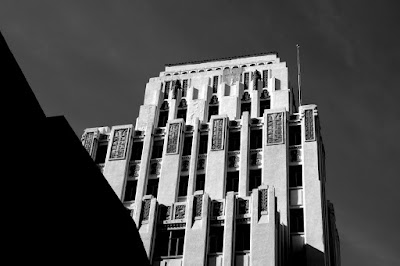 https://pentaxks1photography.blogspot.com/
Posted by Blogs of Bart Santello at 7:33 AM No comments:

Back in 2007 I released what now can be considered a prototype film - INTANGIBLE.  But I always wanted to re-release the film with new elements and with the films scanned in HD.  This final mastered version has been completed and will have its premier at 'The Screening Room' in Tucson, Saturday November 23rd as part of The Screening Rooms 30th anniversary.

Intangible will also screen at the Arivaca Film Exhibition on March 7th, 2020

Psychotropic Films presents a Bart Santello presents digital motion picture - "Intangible", a unique an original assembly of decades-old 8mm film.  Fragmented images of fading memory, embodied in decaying film, chosen for their visual texture & artistic quality, are presented in a dream-like sequence, that awaken a perception of a past - long forgotten by time. 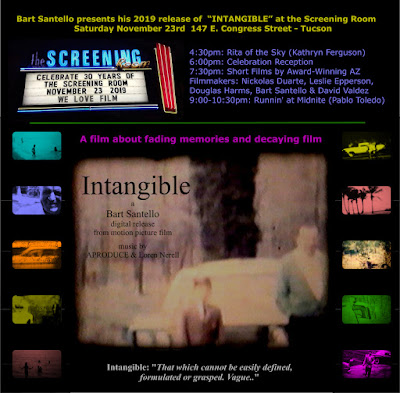 Intangible: "..That which cannot be easily defined, formulated or grasped; vague.."

Posted by Blogs of Bart Santello at 11:37 AM No comments:

Psychotropic Films has been using VIVA restoration software by Algosoft-Tech to assist in the restoration of The Trail to Yesterday (1918) a silent era nitrate film that has been transferred to digital for the restoration process.

This lecture by Algosoft-Tech was recorded at "The Reel Thing" technical conference in Hollywood this past August and there is a small scene from The Trail to Yesterday in the lecture that shows how the software working in cleaning artifacts, scratches, dirt, fading and stabilization issues with scanned film and video.

See 35:45min for the section showing the application of the software to our current restoration project.


How Recent 'AI' Breakthroughs Are Transforming Moving Image Restoration from Psychotropic Films on Vimeo.
Posted by Blogs of Bart Santello at 12:34 PM No comments:

Teaser for The Trail To Yesterday completed

The restoration of this silent era film; "The Trail To Yesterday" (1918) is currently in development by digital filmmaker Bart Santello and Psychotropic Films LLC.

This 'teaser' was made to serve the purpose of demonstrating the success to date of the restoration process; convey a sense of mystery behind this western's melodrama; and provide credits and production information to collaborators, historians and film preservationists that are currently, or may in the future provide assistance in this digital restoration.

The only known surviving nitrate print of this film was discovered at the eyeFILM Museum in The Neatherlands. This was the Dutch distributed version that survived and was retitled at the time as "The Revenge of Dacota"

The motivation for this restoration and preservation project is the fact that this movie was filmed in Arivaca, Arizona, the town where the filmmaker leading this restoration resides.  There will also be an accompanying documentary film produced that will cover all aspects of this film's discovery, restoration, history of The Trail to Yesterday's filming in area, the history of Arivaca, Arizona at the time of the filming in 1918. 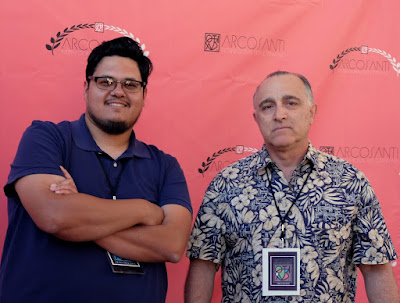 THE DOME directed by Adam Ray (Tacxman Films) and produced by Bart Santello (Psychotropic Films) screened this past weekend at the Arcosanti International Film Carnivale.

Two versions of THE DOME were created. Director Adam Ray's original vision can be viewed in this version: https://vimeo.com/332707570 (14-min).

The 'collaborative' version with an edit by experimental filmmaker Bart Santello can be seen by following this link: https://vimeo.com/213016943 (19-min).

For more information on the Arcosanti International Film Carnivale, follow this link: http://www.arcosantifilmcarnivale.com/ 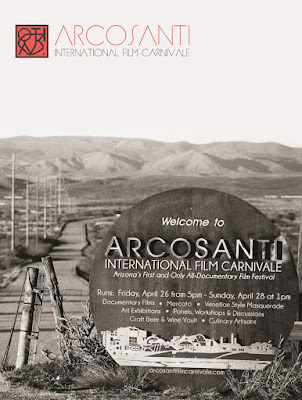 Posted by Blogs of Bart Santello at 10:52 PM No comments:

THE DOME to screen at Arcosanti Film Carnivale

Psychotropic Films in association with Taxman Films with present THE DOME at the 2019 Arcosanti International Film Carnivale on Saturday 27 April.

Directed by Adam Ray of Tucson and produced by Bart Santello of Arivaca, this short is an innovative doc-u-film that depicts one man's dream of building a 'domed' structure out of cob (clay and straw) in the desert of southern Arizona. 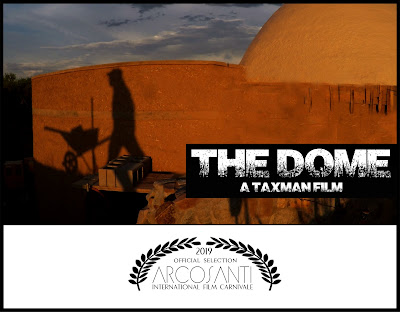 "The Dome" won Best of Arizona at the 2017 Arizona International Film Festival and also previously screened at the 2017 Arivaca Film Exhibition in Arivaca, Arizona.

To see the blog that follows the construction of this cob studio.  See http://cobstudio.blogspot.com

Details on the Arcosanti International Film Carnivale can be found via this link here: http://www.arcosantifilmcarnivale.com/

Posted by Blogs of Bart Santello at 7:24 AM No comments: